When high energy particles, that have their origin outside our solar system, hit earth’s atmosphere, a cascade of particles is generated. Such an avalanche, initiated by a single high energy particle, is called an extensive air shower (EAS).
The only possibility to study high energy astroparticles with an earth-bound experiment is to study the properties of extensive air showers and to deduce the initial particle properties from it.
Beside the well-known detection methods based on direct measurements of the secondary particles or the emission of Cerenkov or fluorescence light in the atmosphere, the radio detection of the shower cascade is a complimentary technique, which again has become a very active field of research over the last few years, driven by the availability of modern digital electronics.This detection method is based on radio emission caused by the geosynchrotron effect and has the advantage of a very high duty cycle of nearly 24 hours a day. 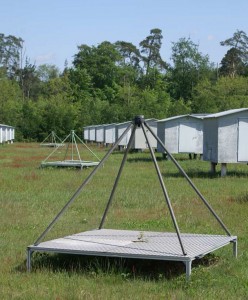 In my diploma thesis I investigated, how strong electric fields, as those occurring during thunderstorms, can influence the air shower radio signal. The work based on the data of the LOPES experiment, which is located in Karlsruhe and consisted of 30 v-shaped dipol antennas. Additionally, the air shower parameters reconstructed by the KASCADE-Grande experiment and measurements of the static electric field have been used. The influence of strong electric fields on the air shower signal has been shown to be significant, based on single events and on the statistical properties of all events that have been recorded during thunderstorms. It seems that even in absence of thunderstorms strong electric fields (e.g. from strong rain clouds) can influence the air shower signal.
As a further topic, additional background signals produced by atmospheric electricity during thunderstorms have been studied. It could be shown that these signals can also compromise the analysis of the recorded data and might be an additional source of error for self-triggered radio experiments.
For related publications, check the astroparticle physics section at the publications page.
The work on radio detection of EAS is now continued with AERA within the Pierre Auger Experiment, at LOFAR and with TUNKA Rex.